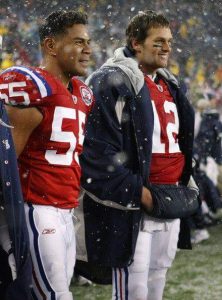 Okay, so I am  native New Yorker, but one of my favorite football teams is the New England  Patriots. Call me a traitor if you like, but I like who I like. I became a Patriots  fan when Jr. Seau got drafted to the team. I have been a Seau fan from the time he was with the San Diego Chargers. So I was very disappointed  when he committed  suicide. But I still stay loyal to the team to keep his memory alive in me. I remember watching him in an interview one time and the person who was asking him a question asked what the saying on his meant, and proceeded to tell him that people often mispronounced his name so he had this had made up as to how to correctly say his name, and the hat simply said “Just Say Ow!”